Our world has forever been changed by the power of social media. Within just a decade, the way that we all share and communicate has be revolutionised by Facebook, Twitter, Instagram and many other popular collaborative internet platforms. Facebook now boasts over a billion users, which when you consider the estimated number of humans on Earth presently is around 7.1 billion, is an impressive accomplishment indeed.

No other technology gives you such a wide reach when connecting directly with your customers.  Social media can be an amazingly useful and beneficial tool for your business, but when social media goes wrong, it can go very, very wrong.  In the immortal words of Spider-Man, "with great power comes great responsibility", and for some companies social media can be a double-edged sword.  In this blog post we'll list the top 5 social media blunders of all time.

After being featured in a rather negative light during an episode of Gordon Ramsey's "Kitchen Nightmares" TV program, Amy's Baking Company received a flood of negative feedback via social media.  What followed was truly amazing.  The owners took to Facebook, and penned what must be one of the most epic and bizarre public rants ever seen: 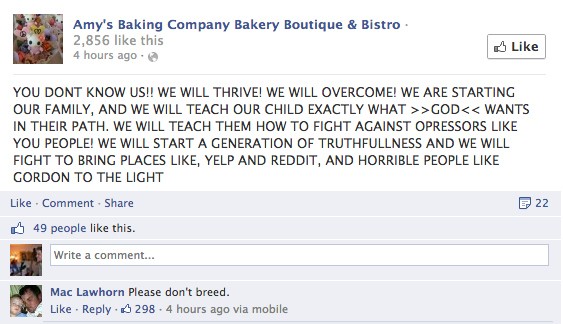 All caps are particularly a nice touch.

But they didn't stop there, they keep going...

The company later claimed that their Facebook account had been hacked and that they were not responsible for the comments posted on their page.

If there's one golden rule of social media that has been proven to be a recipe for disaster every single time, it's this: NEVER try to capitalise on tragedy.  However, food and cookery site Epicurious must have not received the memo: 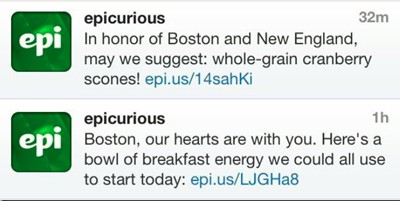 In a clear cut case of "what the hell were they thinking?", someone at Epicurious thought it would be a fantastic idea to promote recipes on Twitter by linking them to the Boston Marathon bombing.  What followed was a massive backlash, followed up by a series of copied and pasted "apology" tweets to followers.  Yes, their response to their fail was yet another fail.

Have you noticed when you create a user account on most social media services that they really emphasize the importance of a strong password?  Well, in February 2013, Burger King learned the hard way what happens when a hacker breaks into your account due to a weak password: 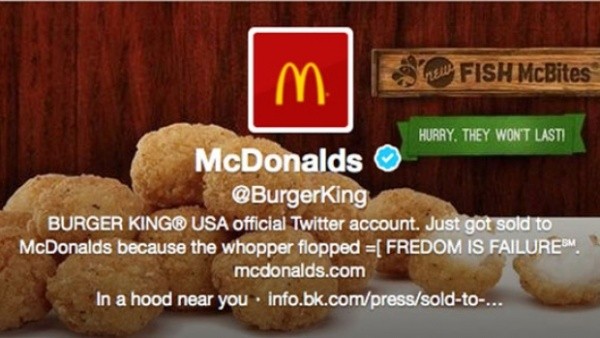 Wait, what?  Burger King with a McDonald's logo?  What followed was a flurry of obscene messages and retweets over a period of about an hour until someone finally paid attention and the account was shut down.  Here lies an important lesson in keeping your passwords strong, changing them often, and controlling access to your social media accounts within your staff.

In one of the more memorable social media backfires in recent memory, JP Morgan Chase learned a tough lesson in how a seemingly well intentioned Twitter campaign can turn into a different beast entirely.  Yes, that JP Morgan Chase, the multinational banking company in hot water over ethical transgressions, foreclosure practices, and a key figure in the Global Financial Crisis of 2007-8.

In late 2013, fresh off a $13 billion dollar fine for illegal activities, one truly wonders who thought a Q&A session with the general public was a good idea.  Nevertheless, it all started fairly innocently with the following tweet on JP Morgan's official Twitter feed:

What followed was a PR team's worst nightmare.  Angry users jumped onto the #AskJPM hashtag in droves, and within 24 hours, Twitter was flooded with tens of thousands of vicious tweets attacking the bank on its lack of ethics.  Here's just a small selection of the tweets that followed:

Yikes. JP Morgan quickly realised that the genie was out of the bottle, and with the situation out of control, they decided to pull the plug on the official Q&A session:

The damage, however, was already done, and the failed campaign will go down in history as one of the worst social media fails of all time.

Probably the worst social media gaffe of all time occurred just this month, April 2014, when the official US Airways Twitter account accidentally sent an X-rated photo as a reply to a customer who was complaining about a late flight.  The tweet went out to around 418,000 followers (but was visible to anyone browsing their Twitter feed), and remained there for about one hour before being removed.

According to a statement by US Airways, it was determined that the photo was sent to the US Airways Twitter feed by another user, and while reporting the tweet as inappropriate content, the photo was accidentally copied and pasted into a tweet sent to the customer.  We won't be reproducing the image here, even in censored form, due to the nature of its content.