Here at Praxis Interactive, we have followed the rise and rise of responsive design very closely.  Until early last year, it was little more than a curiosity, or the latest fad in design. Now, we believe it is a necessity for your business. In this blog post, we will discuss the reasons why.

What is responsive design? 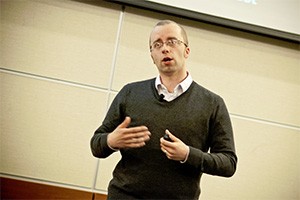 Ethan Marcotte in 2012 (photo by hellogeri)

Responsive design, or responsive web design as it is officially called, was first coined by Boston-based web developer and designer Ethan Marcotte in May 2010, on the popular A List Apart web site.  Essentially, it is the theory and practice of designing web sites in a device-agnostic fashion.  This means that a web site using responsive design will automatically change it's layout for an optimal viewing experience across a wide range of devices, including computers, tablets, and smartphones.

why is responsive design important?

According to statistics, mobile web traffic currently makes up over 10% of global web traffic, and the number is increasing every day.  Research from Gartner shows that this year, more people will use mobile devices to access the web than PCs.  By as early as 2014, it is predicted that mobile internet usage will overtake traffic from traditional desktops.  This means that your business can no longer afford to ignore the mobile web.

why use responsive design?

Before the advent of responsive design, web authors targeted the growing mobile web by typically producing two versions of their sites. The primary version would be aimed at PCs, and is what we call a "traditional site". Most sites on the web are still of this type. Working in parallel with the primary version, a secondary version of the site would often be created just for mobile phones. We've all seen these sites when we access the primary site on our smartphone browser, and are redirected to a site with an "m" prefix, which shows the mobile-only layout, for example: m.news.com.au. 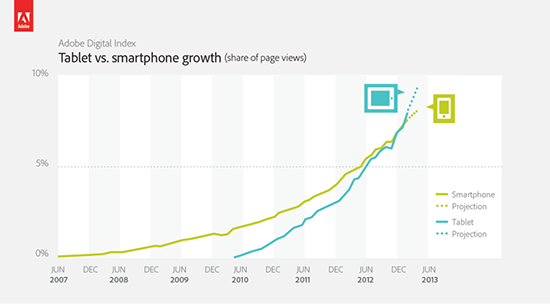 The growth of tablets (courtesy of Adobe Digital Marketing)

For a while, this approach seemed to work well.  However, the introduction of the iPad and the growing popularity of tablets created a problem.  Here we had devices with a screen size that was not as small as a smartphone, and not as big as a PC monitor. Neither the mobile-only version or the traditional site were appropriate, and it was not feasible for web authors to produce separate versions for each new device.

The solution is responsive web design. By developing a site in a responsive fashion, a single version of a web site is created which automatically adjusts it's layout for optimal viewing on popular devices such as smartphones, tablets and PCs.

will my site need responsive design?

In short, yes. The mobile web is here, right now. In fact, the change has come much more rapidly than predicted. Trends show that mobile web is overtaking desktop traffic right now, and will soon eclipse the traditional web. A recent article by .net magazine lists responsive web design as the number one web design trend for 2013.  Within a year from now, the majority of popular sites will have switched to a responsive design to cater for the shift in web traffic. The question is, will your site be ready for the change, or left behind?